Governor’s working meeting with the Heads of Municipality Boards 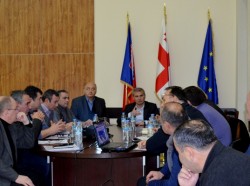 The State Attorney – Governor in the Kakheti Region Mr. Irakli Kadagishvili arranged the annual meeting of 2016 year with the heads of Kakheti Municipality Boards. They discussed all the actual problems in detail at the meeting and had a talk about the projects’ implementation for 2017 year. ,,the dialogue at the meeting was about projects to be financed by the Regional Development Fund in the next year, as well as the existing problems in the municipalities. There was outlined the future plan for regional development. “I think that such kind of meetings will support the timely solution of existing problems in the municipalities’’ – stated Mr. Irakli Kadagishvili.

At the meeting the governor said that the local self-government should be as transparent as possible and oriented on concrete results, Mr. Irakli Kadagishvili has marked all the problems existed in each municipality and which need a support of the Government of Georgia for their solution.

The President of Georgia

Ministry of Agriculture of Georgia

Ministry of Regional Development and Infrastructure of Georgia
Telavi
B
0o

Rehabilitation Works for Telavi and Usakhelo Ravines are ongoing